Hello all!  It's been a while since we've posted any updates, and this is long overdue. After sitting for a few long months with no use (it was a very busy semester), the PDP-12 is still working great! Although, it seems that the problem with the Teletype Receiver or Transmitter Flip Chips may be coming back (see earlier post  here .) We may need to do some more testing on those cards. Which, brings me to the main purpose of this post, Warren's Flip Chip Tester! The Flip Chip Tester had been one of Warren's projects for a number of years and after he passed away, a production version of the board was created by Vince (The same person who made our RS-232 interface and baud rate generator Flip Chips.) Warren's version was designed for a hardware parallel port and Windows XP, running in the DOS command line. Mike Thompson from RICM has been developing a GUI version of the program and made modifications for the board to run from USB. We are cu
Post a Comment
Read more 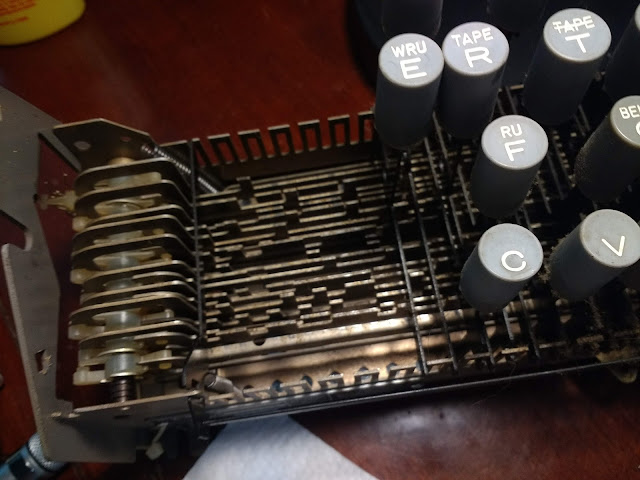 The keyboard is now greased, oiled, and (hopefully) ready to go! I decided to remove all of the keys and all of the codebars (the metal strips with notches in them under the keys) to make oiling easier. Almost every point where two parts have contact (like the pivots on the ends of the codebars or the contact points where the keys hit a metal spring under the keyboard) needed a few drops of oil. A precision oiler was incredibly helpful and sped things up immensely, while minimizing the oil spilled on the table... In the last post I mentioned replacing the ESC key with the ALT MODE key from a different keyboard. I decided to keep the original ESC key after all. This decision was made because the two keys were not identical as I thought, and on each keyboard the CTRL keys had a different design as well. I assume that the ESC key would be coded the same as the ALT MODE key, but to be safe I left it as it was. In the future I may consider swapping the CTRL keys and the ESC/ALT MODE keys
Post a Comment
Read more 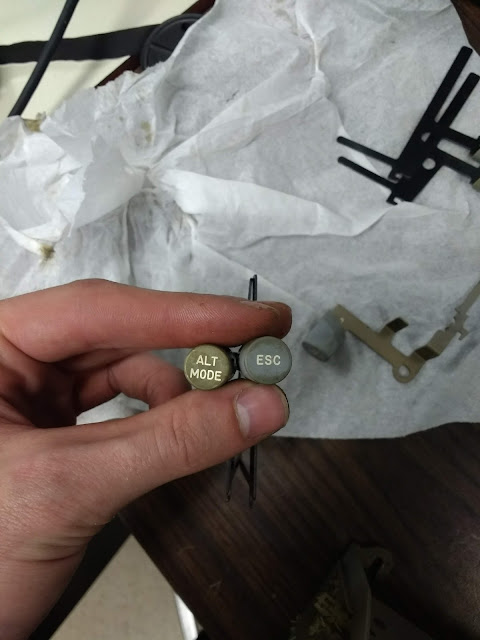 Last night I started removing keys from the keyboard that are cracked, or that I just wanted to replace (mainly swapping the ESC key for the ALT MODE key.) I will need to get some cleaning supplies and clean down all the keys and the cover before oiling and re-assembling the unit. I also disassembled the modem to look for any more information on it, but alas, I found nothing helpful. I found some large capacitors that look suspicious. They have what appears to be hints of some corrosion on one of the terminals, but it could also be old solder or flux.  I will remove them from the circuit later to test them further and see if they are truly bad. I also found a corner of one of the boards that has some suspicious burn marks. I suspect this was from a soldering iron, but I will check the components over thoroughly just to be safe. The dark green board is probably one of the most populated PCBs I have ever seen.
Post a Comment
Read more 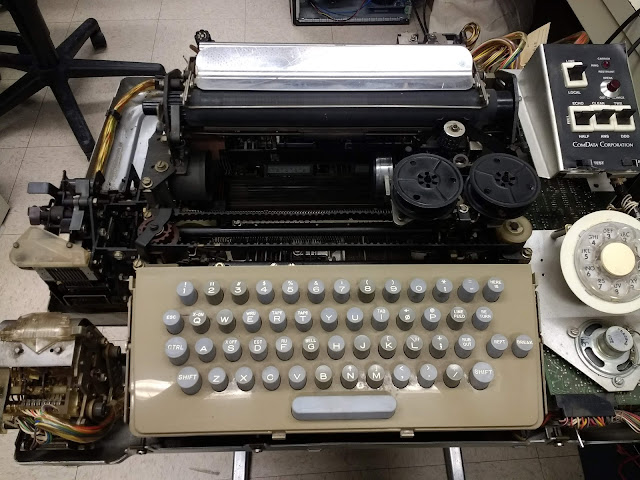 I have started work on the Teletype now. The first challenge was figuring out how to take things apart. Everything is so well designed that it all fits perfectly in place with very little space between parts. I am starting with the keyboard assembly first. I will be cleaning it and then replacing keys (if needed) from our spare ASR-33 to make the nicest looking keyboard I can. Removing the keyboard was a challenge as I had to run to Sears to pick up a slightly longer and thinner screwdriver to get at the mounting screws that were a little out of reach.  I removed the modem that was attached to the Teletype in order to get at the keyboard better. It appears that all communication to the computer and Teletype goes through the modem first. I have yet to find any schematics or documentation for it (If you know of where it might be hiding, please don't hesitate to let me know!) There will be more posts soon as I start oiling and greasing the countless gears
Post a Comment
Read more 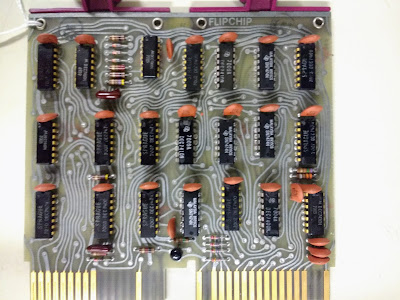 I replaced the last two output flip flops (e5 and e10) and put the Flip Chip back in the computer. I ran the send/receive program to test things out. No errors in the received characters were seen. To test things a little further I loaded the BIN loader and started loading some diagnostics, and finally, the "Acid Test" as Warren used to call it, I loaded Focal (which is a large enough program it is broken into two parts.) All of these ran perfectly. Interestingly, when I clipped out one of the 7474s, a small piece of the plastic case fell off, so it would appear that this one was most certainly a problem. Soon a friend of mine, and myself, and I will be working on getting the ASR33 Teletype up and running.  Stay tuned!
1 comment
Read more 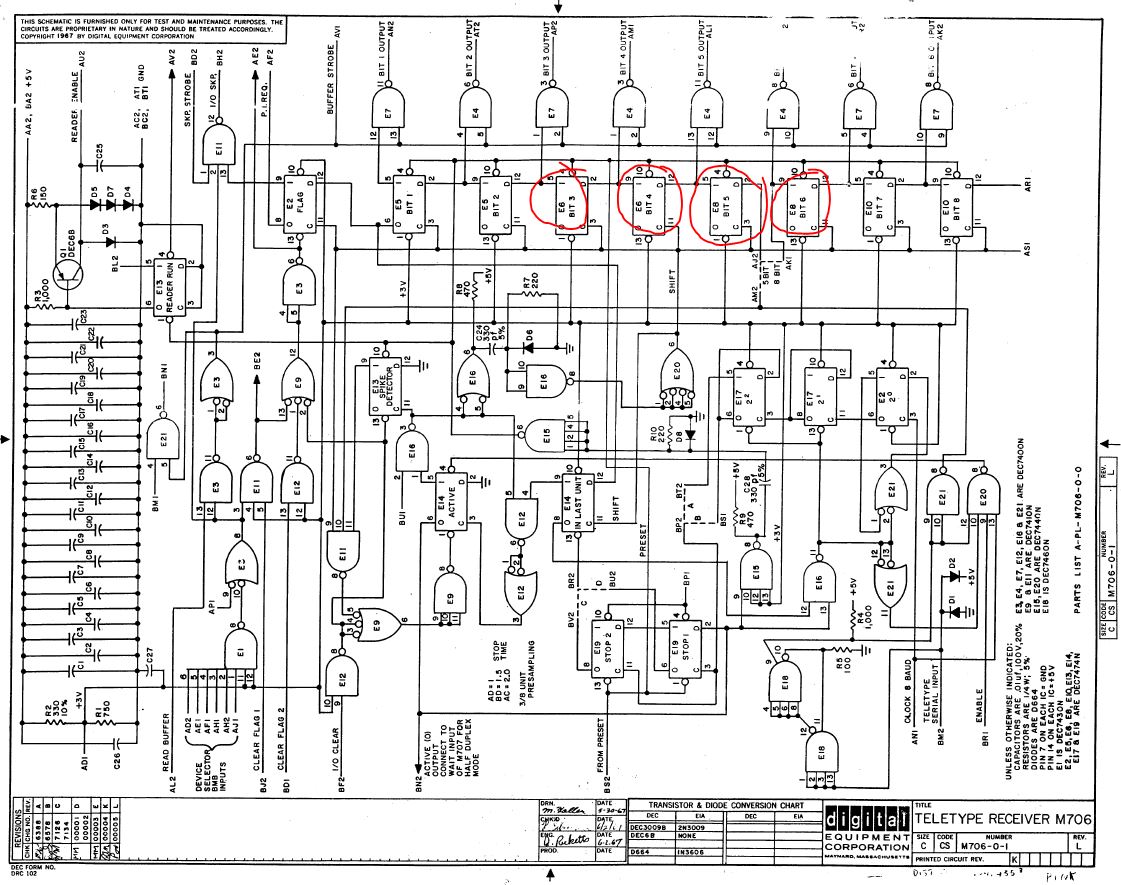 It's been quite a while since the last post, and now that my final exams are done I have time to get back to work on the PDP-12. Recently, one problem that we have been experiencing is with the communication between our terminal computer and the PDP-12. When running OS/8 we noticed that sometimes when we press a key, the character that is printed on the screen is not the one that was pressed. The problem was sporadic at first, but quickly became more frequent, until it became frustrating to type anything because it would never send correctly. Another problem was/is with sending BIN programs. We have never had problems with sending RIM programs, bit BIN programs always seemed to fail half of the time they were sent. Sometimes the BIN loader doesn't send correctly, sometimes the program being sent using the BIN loader stops sending half way through, or it will send completely, but it won't run. Both of these problems seemed to be linked to the Teletype Receiver Flip Chi
Post a Comment
Read more 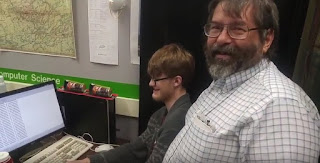 It is with a deep sense of loss that we report that Warren Stearns, the PDP wizard who came from Rapid City, South Dakota to help us restore our PDP-12, died on Sunday, August 6th 2017 following a massive heart attack. We waited to write this post until his obituary was posted ; visitation is tonight and the funeral is tomorrow, Thursday, August 17th, in Hartford, SD (details at the above link). Warren was well known in the PDP-8 community and spent a considerable amount of time traveling to various vintage computing gatherings and helping others restore their vintage machines. We first got in touch with Warren through the Rhode Island Computer Museum's (RICM) Michael Thompson, who had (with others) worked alongside Warren to restore their own PDP-12 starting in 2015. Michael told me that Warren might be interested in coming to help us. Warren called me a day or two later and said that he could be there in two days. Warren was so generous to us with his time -- he spent e
Post a Comment
Read more
More posts